By controlling tadpoles tou can stop the toad population increasing in the area and it also means there are no small toads around and these are the toads that kill many smaller reptiles! Cane toad tadpoles have some key differences to our native tadpoles that help you to identify them. Tadpole traps make it easire to do (see below)

Cane Toad tadpoles are very dark and look black in daylight and appear to have short narrow tails because the tail muscle is dark but the fin around it is almost invisible in water because it is transparent .

One way to identify them is to compare the tail length to the body length. With cane toads the body and the tail are about the same length or the tail may be slightly longer than the body section. Cane toad tadpoles grow to about 30mm (total length) before turning into toads. This catches many people out as they expect toad tadpoles to be big because toads are big. This is not the case, cane toad tadpoles are smaller than most of our native tadpoles when they get their legs.

At certain times cane toad tadpoles group together making them easy to net and you can also use traps to catch them with great success. Netting is the easiest and they are often grouped up and in shallow water at night. 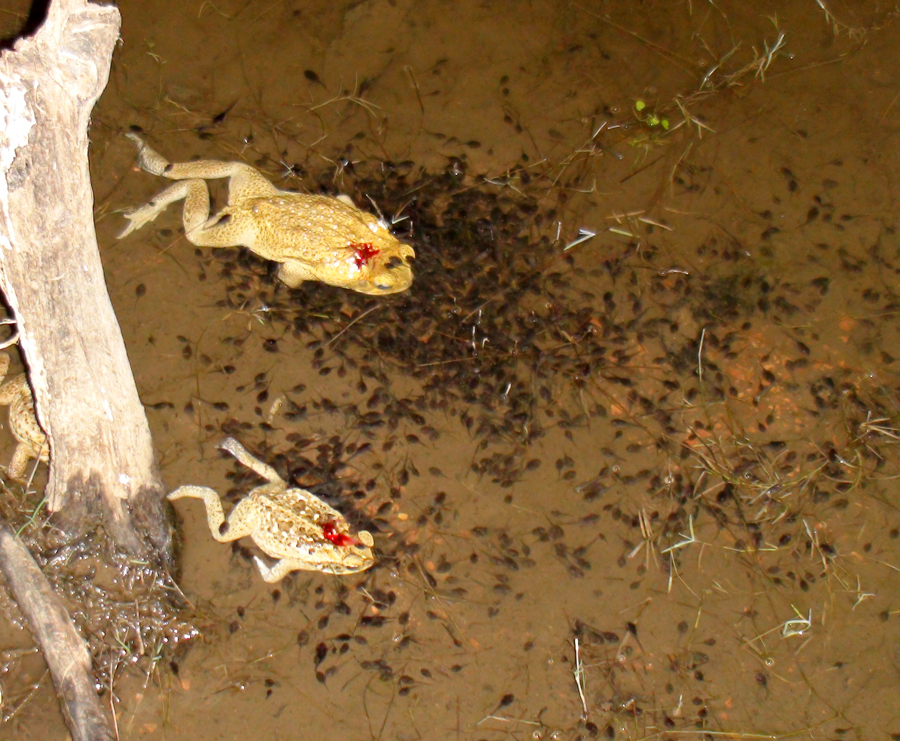 It is possible to get tadpoles to group up by using bait. We have used traps with dead toads or dog biscuits with some success. Usually the tadpoles group together when they have their legs and just before leaving the water making control very effective. in the picture to the left the tadpoles were easy to net as they were attracted to the dead toads in the water.

Tadpole traps, baited with the toxin of cane toads, can very effectively catch tadpoles allowing you to easily remove them from water bodies  . 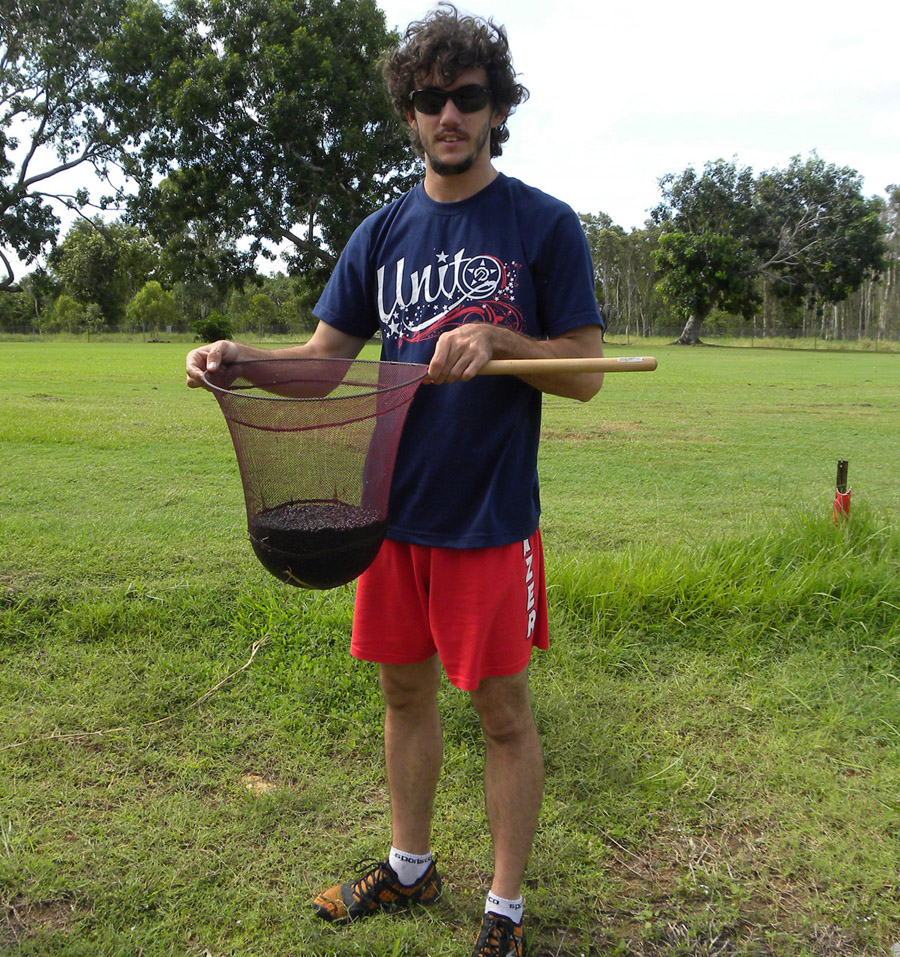 Previously we have used netting to remove cane toad tadpoles and sprays to control any metamorphs that emerge from the tadpole stage. Traps can be used and prawn traps with dog biscuit baits can be quite effective but there has been by catch issues. Removing tadpoles has been quite labour intensive and whilst it works extremely well in some cases, (typically where the tadpoles are in clear water bodies with limited vegetation and other obstructions, and when they are schooled in groups) it can be very difficult in areas with thick aquatic vegetation and murky water and when the tadpoles are spread out..

We have trialled tadpole traps in 2 separate cases and managed to capture significant numbers of cane toad tadpoles.

The first trial was a backyard pond which had cane toad tadpoles in it in July/August 2012. Commercial mesh prawn traps were used in the trial using dog food and toad toxin as bait. The toad toxin was collected from the parotoid glands of frozen cane toads.

The traps removed 1083 tadpoles from the pond and no metamorphs were recorded emerging from the pond. 698 tadpoles were captured in the dog food bait and 358 were caught with the toad toxin bait, 27 were caught in the control trap with no bait.

The second trial was in a 400 metre section of drain/ creek in Leanyer.

A combination of funnel traps and prawn traps were used in the trial. The drain is a typically difficult environment for manual control and the tadpoles were distributed along a signifcant section of the drain with vegetation and rocky sections.

Funnel traps work best and are fairly easy to make and work quite well.

Where did Cane Toads come from? - view

What can I do to stop Cane Toads - view

How do I "toad bust" my area to stop the toads? - view

Amphibians were the first backboned animals to emerge onto land. Far older than the dinosaurs they have evolved many strage survival strategies.